The end? There is no end, son. (On constructing believable villains.)

Someone once said that darkness is necessary in order to see light. That doesn't even have to be metaphor: in visual art, you need negative space to throw focus on your main subject. In drama, you need a good villain to make your hero shine. I've found a main problem in a lot of manuscripts I've beta-read recently is that their villains aren't whole people with believable motivations. They're just daemon ex machinas who exist to do miscellaneous bad things to Our Hero.

No. That's never how it goes. No one sits in a tower, twirling a mustache, thinking of diabolical things to do for fuck's sake. They must have a reason to want to make life hard for your protagonist. Let's use Order of the Stick as an example. It's both a comic and a parody, so their villains should have every excuse to be cheap and cheesy - but they're not. They all have motivations.

If they're specifically a rival who is targeting your hero personally, there's some reason why their rivalry started. More likely, "evil" characters are just people with their own needs and agendas, and your protagonist just gets in the way. One of my favourite tragic arch-villains is Redcloak. He's the high priest of the goblin race - about as stereotypically "evil" as a character can get. His backstory, however, is that paladin "good guys" regularly make unprovoked raids upon "monster" settlements, slaughtering everyone in sight, because their skin is green and their teeth are pointy, which means they're "evil." It's just how adventurers build XP - otherwise known as ethnic cleansing. It's nothing less than a quest to stop the genocide and win equal rights to live in peace for his people that drives him, and turns him into a hateful super-villain who will torture any paladin he can get his hands on.

Then there's Tarquin, (aptly named after the Roman despot,) the Super-Villain to end all Super-Villains. His reason is simple and meta. There's always evil in the world, no matter how hard the good guys strive against it, so why not live well? Even when he's self-aware that he is evil for evil's sake, he has a damn good believable human reason for it: selfishness.

"The end of what, son? The story? There is no end, just the point at which the storytellers stop talking. Somewhere between 'villain of the week' and 'good triumphs over evil' there's asweet spot where guys like me get to rule the roost for years. [...] I was willing to make that deal when I thought it was going to be some random peasant schmuck taking me out, but now I see the big picture: It's YOU. [...] Think about it! An epic for the ages! Father vs son! One hero vs the force of an empire! They'll tell stories about us 'til the end of history! [...] That's the beauty of it all, my son. If I win, I get to be a king. If I lose, I get to be a legend. "

I've said it many times before, and I'm not stopping anytime soon: ALL good fiction is character-driven. Find out your villain's reason to do what they do. Even if it's just because they're sadists, something happened to make them that way. (Read up on the Marquis du Sade - sadism is anything but simple or uninteresting.) Hurting other people is frequently how people release their own pain, and audiences understand that. Let us know how your villain was hurt first, and then we'll understand him.

Then send him out there to crush his enemies and hear the lamentation of their women. 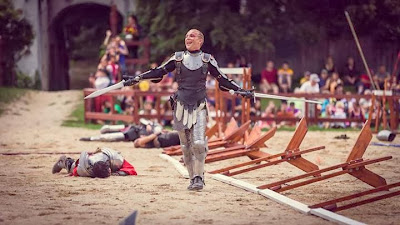